This post is on my high school business teacher, who's open about her left wing politics.

Posted by pwalmanac at 10:27 PM No comments:

Posted by pwalmanac at 6:04 AM No comments:

Someone I Knew From A Message Board 10 Years Ago

This post is on someone I knew from a message board 10 years ago.

Posted by pwalmanac at 4:19 AM No comments:

Posted by pwalmanac at 4:08 PM No comments:

Posted by pwalmanac at 12:29 AM No comments:

The Last Card And The Fifth World Of Hopi Prophecy

This is a very interesting post on http://in5d.com about the Hopi Prophecy, and it also goes in depth on how the elites are staging "end times" events in order to acheive enlightenment.

The Last Card And The Fifth World Of Hopi Prophecy 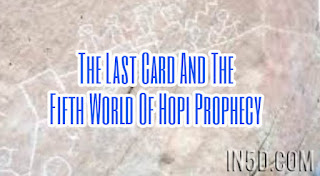 by Gregg Prescott, M.S.
Editor, In5D.com
How does Hopi prophecy ties into what is going on in our world right now?  Recent current eventshave all pointed in the same direction from two different perspectives.
Dr. Carol Rosin warned us about the weaponization of space through her professional relationship with ex-Nazi scientists, Dr. Wernher von Braun, who warned Rosin about the following external threats that would be created as a false flag by the United States government:
“They’re inventing enemies he (Von Braun) said, against whom they are going to build this space-based weapon system—the first of whom was the Russians which was existing at that time.  Then there would be terrorists, then there would be third world countries, now we call them rogue nations or nations of concern.  Then there would be asteroids.  And then he would repeat to me over and over ‘and the last card, the last, the last card would be the extraterrestrial threat’…you will find that there is going to be a spin to find some enemy against whom we have to build space based weapons and now we should expect the spin.”
Space-based weapon system: Reagan’s Star wars Program.
Terrorist threat: 9-11
3rd Word Countries threat: North Korea
Asteroid threat: Elenin (while not classified as an asteroid, the apparent government psyops would assimilate Elenin into this category
Extraterrestrial threat: To be announced.
Ronald Reagan was the first fear-mongering world leader to instigate the star wars propaganda (most likely ) through his puppetmaster Vice President, George Bush.
Hopi prophecy foretells of specific signs that points towards the fulfillment of their end time prophecy.  Many of these signs have already come to fruition.
According to Hopi prophecy:
First Sign: We are told of the coming of the white-skinned men, like Pahana, but not living like Pahana men who took the land that was not theirs. And men who struck their enemies with thunder. – Columbus “discovering” America
Second Sign: Our lands will see the coming of spinning wheels filled with voices. In his youth, my father saw this prophecy come true with his eyes — the white men bringing their families in wagons across the prairies. –
Third Sign: A strange beast like a buffalo but with great long horns, will overrun the land in large numbers. These White Feather saw with his eyes — the coming of the white men’s cattle.
Fourth Sign: The land will be crossed by snakes of iron.
Fifth Sign: The land shall be criss-crossed by a giant spider’s web.
Sixth Sign: The land shall be criss-crossed with rivers of stone that make pictures in the sun.
Seventh Sign: You will hear of the sea turning black, and many living things dying because of it.
Eight Sign: You will see many youth, who wear their hair long like my people, come and join the tribal nations, to learn their ways and wisdom.
Ninth and Last Sign: You will hear of a dwelling-place in the heavens, above the earth, that shall fall with a great crash. It will appear as a blue star. Very soon after this, the ceremonies of my people will cease.
Hopi Bear Clan elder, White Feather, stated, “I am White Feather, a Hopi of the ancient Bear Clan. “These are the Signs that great destruction is coming. The world shall rock to and fro. The white man will battle against other people in other lands — with those who possessed the first light of wisdom. There will be many columns of smoke and fire such as White Feather has seen the white man make in the deserts not far from here. Only those which come will cause disease and a great dying. Many of my people, understanding the prophecies, shall be safe. Those who stay and live in the places of my people also shall be safe. Then there will be much to rebuild. And soon — very soon afterward — Pahana will return. He shall bring with him the dawn of the Fifth World. He shall plant the seeds of his wisdom in their hearts. Even now the seeds are being planted. These shall smooth the way to the Emergence into the Fifth World.

In my long life I have traveled through this land, seeking out my brothers, and learning from them many things full of wisdom. I have followed the sacred paths of my people, who inhabit the forests and many lakes in the east, the land of ice and long nights in the north, and the places of holy altars of stone built many years ago by my brothers’ fathers in the south. From all these I have heard the stories of the past, and the prophecies of the future. Today, many of the prophecies have turned to stories, and few are left — the past grows longer, and the future grows shorter.

“And now White Feather is dying. His sons have all joined his ancestors, and soon he too shall be with them. But there is no one left, no one to recite and pass on the ancient wisdom. My people have tired of the old ways — the great ceremonies that tell of our origins, of our emergence into the Fourth World, are almost all abandoned, forgotten, yet even this has been foretold. The time grows short.
“My people await Pahana, the lost White Brother, [from the stars] as do all our brothers in the land. He will not be like the white men we know now, who are cruel and greedy. we were told of their coming long ago. But still we await Pahana.
“He will bring with him the symbols, and the missing piece of that sacred tablet now kept by the elders, given to him when he left, that shall identify him as our True White Brother.
“The Fourth World shall end soon, and the Fifth World will begin. This the elders everywhere know. The Signs over many years have been fulfilled, and so few are left.”

The “Powers That Were” Are Paying Attention

Those in power are most certainly aware of the Hopi prophecy as well as all other prophecies as evidenced by the building of numerous underground bunkers throughout the world, as well as the implementation of the underground seed vault.
If you follow free masonry to the highest levels, you’ll find the motto “ordo abchao” which means order out of chaos.  You will also discover that they follow the Luciferian Doctrine, which is why there is a forced agenda to follow, as evidenced by the attempted implementation of codex alimentarius, Agenda 21 and the North American Union.  In other words, they are trying to force a simulated recreation of the bible’s Revelations chapter in order to achieve their perceived enlightenment as fulfilled through the Luciferian Doctrine.

Are these the end times that the Hopi spoke about?

We are clearly at the end of the Hopi prophecy.  While it is in this writer’s opinion that it will not be as cataclysmic as the Hopi described, certain changes are inevitable in order to begin the Golden Age, such as a complete reformation of government, our educational systems, money and religion.
What we do know is the Pluto entered Capricorn in 2008 and will remain there until 2023. Pluto is known as the “Destroyer” and will tear down everything that is not in humanity’s best interests, including money and government. The last time Pluto was in Capricorn was in the 1700’s during the French and American Revolutions. The stars provide us an opportunity to learn from the cycles of time. How we react and what we do will determine the outcome. It can be as simple as envisioning the world YOU want to live in.

What can I do?

How this plays out and what the time schedule is remains unknown.  My recommendation is not to focus as much on the date but more on what is happening today. You also want to be cognizant of where you are placing your thoughts because as thoughts manifest quicker and quicker, you want to be sure your thoughts are of the highest intentions.
Some of the best advice I received as a parent is not to look forward to specific milestones, such as the first time your child stands up, walks, talks, etc… because you’ll miss everything that happens in between.  The same can be said of these days we are living in.  In time, we will fondly look back at these trying times and will be grateful for all of the opportunities we had to grow spiritually.
Most recently, the message I keep getting over and over and over again is to keep your vibration high, love, express gratitude, forgive, and to work on activating your dormant DNA.


In the meanwhile, enjoy the ride and do not be concerned about any end date predictions.
Follow In5D on Facebook!
Click here for more articles by Gregg Prescott!
Full article here: http://in5d.com/the-last-card-and-the-fifth-world-of-hopi-prophecy/
As I've mentioned before, all the division in the world and all the false flag attacks, including 9/11, are there to create chaos, in order for the "order" to come, hence order out of chaos. If humanity is united, no New World Order can happen, as there would be no chaos.
Posted by pwalmanac at 11:00 PM No comments:

Posted by pwalmanac at 10:03 PM No comments:

Posted by pwalmanac at 9:52 PM No comments:

Posted by pwalmanac at 7:48 PM No comments:

This post is on rapper Jay-Z, and I'm using the 1969 chart as Libra Moon is very visible in his eyes.

Posted by pwalmanac at 5:30 PM No comments: