"Free Will" in Astrology- Overrated

There is, and always has been, a lot of talk about "free will" in regards to astrological events. Sure, free will does exist, as we aren't robots; however, that free will comes into play into events that aren't vital to our life paths. For example, the types of foods you eat and when you decide to eat, the clothes you wear, what time you go to bed, what time you get up in the morning, etc.

For events that are to play a critical role in your life or are part of a story, however, it is a different story.

Why? For things like career choices, relationships, and political views, I noticed that you tend to feel a "pull" in a certain direction. Yes, you can try to fight it, but it will prove to be very exhausting and most likely you'll eventually give in. As shown in this blog, astrological indicators for right wing and left wing political ideology are shown in the natal chart, and it is shown to be very reliable with very few exceptions, mainly in the political sphere and Hollywood, where your political views can make or break your career. Hollywood is dominated by the "astrological left", as shown in numerous examples on this blog, and so are the coastal states, the northeast, and the states around the Great Lakes, while much of the midwest and the south are dominated by the "astrological right". Running as a Democrat is almost pointless in many states in the south, and as a result, many politicians present themselves as Republicans, while their voting records are less than conservative. The same is true for running as a Republican in many places in the northeast, though "DINOs" are less common than "RINOs". Why? Neptune, the planet that rules deception, is prevalent in the charts of the "astrological left", with it often aspecting Venus and the Moon simultaneously, which makes for an economic and cultural liberal. People's political viewpoints are things that people tend to feel very strongly about, hence the "pull" I mentioned.

For example, the year I got into astrology was 2013. My Solar Return for that year had Sun, Mercury, Venus (the chart ruler), and Jupiter in my 9th house! The 9th house rules philosophies and world views, and it was only fitting that the way I viewed the world began to change that year, through astrology! Mars, the planet that rules action, was in the 8th house, which rules "occult" subjects. Because of those indicators, I felt the "pull" to dabble in astrology in November 2013, and 5 years later I'm continuing to practice astrology and am STILL learning even! In my natal, I have Moon conjunct Pluto in Scorpio (the sign that rules the "occult"), Mars in Pisces (the sign that rules spirituality), and Sun and Jupiter in the 9th house. Interest in astrology and different world views are prevalent in my natal as well. Pull...

While free will does exist in life, it is given too much credit, as some things are just meant to be, especially if they are to play a major role in your life, like astrology and left wing politics have in mine.
Posted by pwalmanac at 8:41 PM No comments:

Strong economic lean to the left. 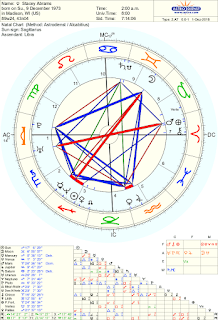 Posted by pwalmanac at 2:21 PM No comments: