This post is on political commentator Ana Navarro, who's a Republican despite being labeled as a liberal for being against Trump.

Fiscally to the left, socially to the right, mixed Pallas- Right wing partisan

The chart suggests that she does have right wing ideology, socially, likely because of her religion, which also explains the left wing economic indicators. 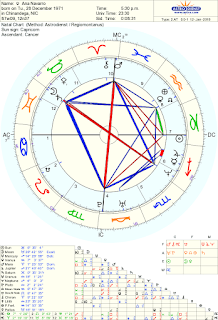 Posted by pwalmanac at 7:34 AM