This post is on US Treasurer Jovita Carranza, whose DOB I got from mylife.com. The chart is set for Noon because she looks like Libra rising.

This is the common pattern with Latino Republicans, as most Latinos are Catholic, which involves a socially conservative and fiscally liberal doctrine. 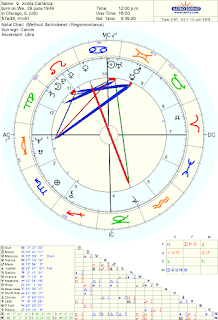 Posted by pwalmanac at 8:42 PM